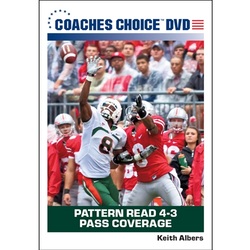 Coach Albers is an author and a speaker on football coaching strategies and schemes.  Click on the "Contact" Link to book Coach Albers for your clinic.

Keith Albers has been the Defensive Coordinator at O'Fallon High School, where the success of his variation of Pattern Read Coverage and his 4-3 scheme have brought about success on the field and opportunities to publish about his schemes.

In 2010, Coach Albers published a DVD series through Coaches Choice coving the topics of his coverage and defensive schemes.  In 2011, his first book hit the market Coaching the Pattern Read 4-3 Defense.

Also in 2011, Coach Albers joined the Nike Coach of the Year and Glazier Football Coaching Clinics as a speaker.